In Style Transportation is the leading Limo and Car Service serving Century City, California.  Our all luxury fleet of Lincolns, Cadillacs and Mercedes is less than three years old.  We have airport permits at Los Angeles International Airport, LAX, John Wayne Airport, SNA, Century City Burbank Airport, BUR and Long Beach Airport, LGB.  Reservations can be made by email, online, phone or through our phone application.  We operate 24/7/365.  We have an impeccable reputation and maintain a 5 star rating on Google, Yelp and Trip Advisor.  When choosing a limousine service in Century City, we hope you consider In Style Transportation as your trusted car service.

The distance to LAX from Century City is approximately 12 miles.  The drive time to get there can range from 20 to 50 minutes during rush hours.  Typically, if you leave before 6:00 AM in the morning, you can get to LAX in about 20 minutes.  However, if you leave between 6:30 AM and 9:30 AM or between 3:00 PM and 7:00 PM, the trip will typically take about 40 to 50 minutes.   When scheduling your pick-up time, we generally like to add 30 minutes to the typical travel time to allow for variances in traffic and potential jams due to accidents or construction.  So, if you leave during morning rush hour, we would schedule your trip about one hour and 15 minutes prior to the time that you would like to arrive at LAX.

The distance to SNA from Century City is about 50 miles.  You can reach John Wayne Airport in 50 minutes or up to one hour and 45 minutes during rush hour. Traffic getting into and out of John Wayne Airport typically runs smoothly and is usually not congested.

The distance to LGB from Century City is about 31 miles.  You can reach Long Beach Airport in about 40 minutes or up to one and a half hours during rush hour. Traffic getting into and out of Long Beach Airport typically runs smoothly and is usually not congested.

The distance from Century City to BUR is about 24 miles.  In light traffic, it will take about 30 minutes to get to the Burbank Airport, but up to an hour in rush hour traffic.

Century City is a neighborhood in the City of Los Angeles and home to about 2,400 residents.  It is a compact commercial district marked by high-rise hotels, condos and offices. Power-lunching entertainment industry executives frequent the trendy restaurants located in the area.

We would love the opportunity to serve as your Century City Car Service.  Please book online or call us at (424)333-6184. 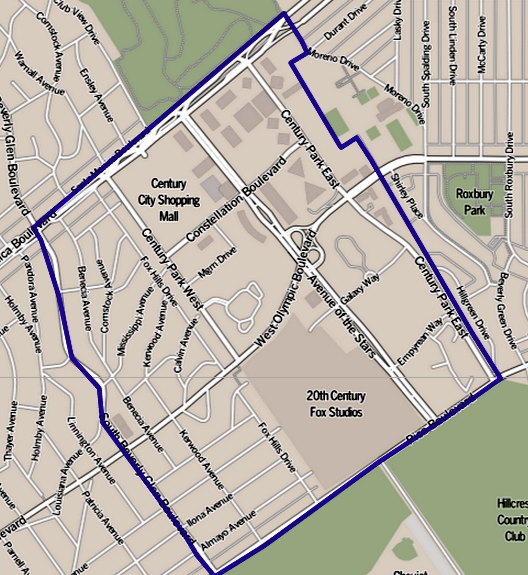 Rates are subject to change and availability and do not include a variable gas surcharge or typical gratuity of 20%. Rates to and from an airport are a flat fixed rate. Other destinations are estimates based on a pick up at the Westfield Century City.  A $15 EVENT FEE will be added to all PICK UPS at an event venue with a capacity of 2,500 or greater.